There have been many types of sightings in Australia and they have been documented in every Australian state since European settlement and is also part of Indigenous oral history. The creature remains a cryptid of the Australian bush and is sometimes referred to as an "ape-like creature" or "hairy man" which has been compared with the American Bigfoot and Sasquatch. The states of Queensland and New South Wales share the bulk of reported sightings that continue to the present day not only in the Australian outback but also in forested coastal regions. Our team of cryptozoologists conducts research and collects witness reports.

Yowie sighting news with the latest sightings reports can be found in the News Blog HERE. If you would like to contribute to our sighting database and network please use the email below to get in touch:

Contact us with your sighting information and news. Email Us: This email address is being protected from spambots. You need JavaScript enabled to view it.

Find witness reports for specific Australian states in our state-by-state database which is continually updated with new reports as they are sent in and verified.  Find the informative database HERE

Australian Yowie Facts - What is known and reported.

What is a Yowie

A sketch by a witness from a 2022 Yowie Sighting report in Queensland depicts the Yowie of the Australian bush. The report is one of a long list of sightings and encounters documented through the European settlement of Australia since 1795. The Yowie also has its place as part of Aboriginal people oral history going back thousands of years. The tales from both Europeans and Aboriginals generally describe a huge, hairy beast standing on two muscular legs with arms that extend to or past the knees and a massive torso as thick or thicker than a bull. Further witness reports describe the elusive creature's large head, sometimes conical in shape, which is dwarfed by its incredibly broad shoulders and often appears to have no neck at all. Read more about the Yowie HERE. 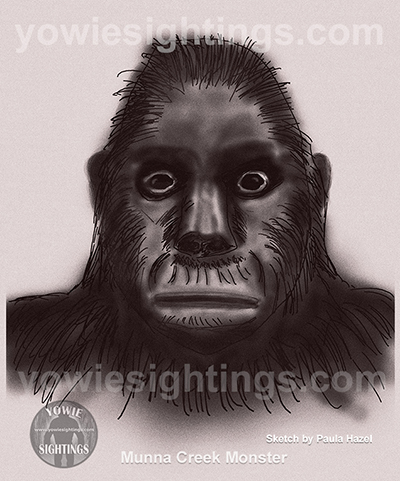 A sketch of a Yowie from a 2022 witness report in QLD Wide Bay area.

Where are Yowie found in Australia?

You can find the latest sightings near me by visiting our Yowie sightings map page HERE. We continually add sighting reports to our map page and our own location reports can be found on the blog.

From the witness reports and interviews conducted we know that an encounter can have a profound effect on the individual or group. Many people that have spoken to us and reported a sighting have found the process cathartic and eased their minds. We believe learning about other sightings and appreciating that many others have had similar encounters will help ease the anxiety associated with Yowie encounters.

This website is a portal and safe haven for reporting an encounter and continues to develop with information as reports are received. We receive witness reports from a variety of sources and only publish credible sighting reports based on our forensic interview techniques. Any report published on the website will have been done with the express permission of the person making the report. The majority of sighting and encounter reports are added to our AustralianYowie database and  to help understand the habitat range of the Yowie. Another interesting resouce is our Map Page that displays sightings and encoiunters in an easy to view format. 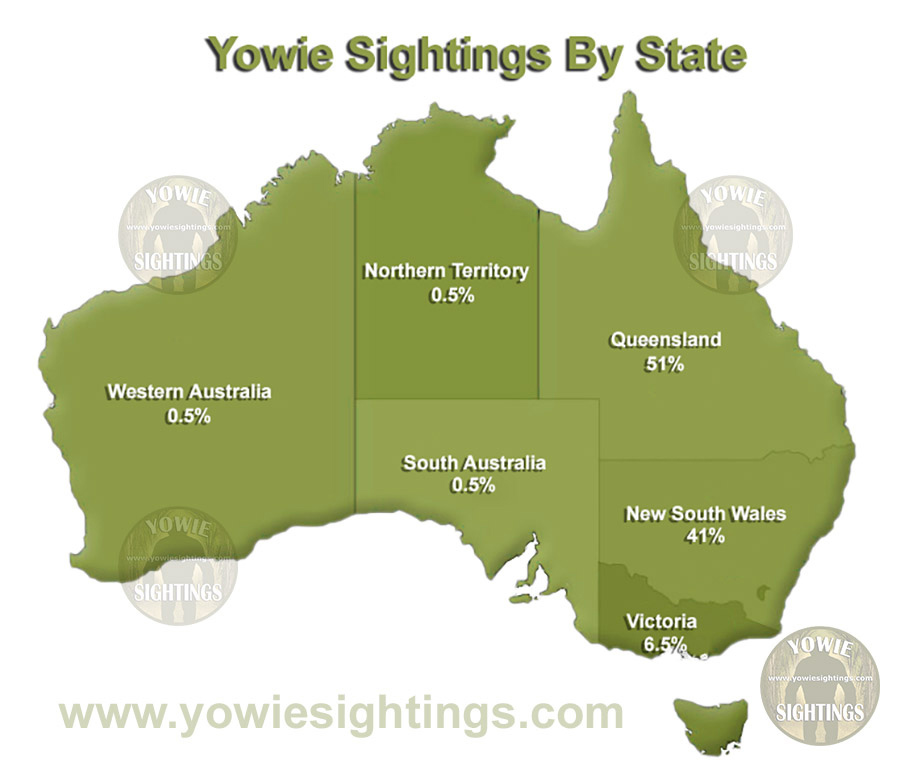 Our team are experts in Yowie investigations and research. Whether it's sightings in Queensland or elsewhere in Australia, our website is an information resource to help with research and understanding strange cryptids purportedly existing in the Australian wilderness and bush. Discover news and facts throughout the website to gain a better understanding of this creature and the encounters reported.

The Yowie remains an Australian cryptid even though there is substantial anecdotal evidence of their existence from thousands of eyewitness reports and stories. Also known as Quinkin, doolargarl and Yahoo among others from Aboriginal culture and Australian Apeman. Australian Aboriginals were not known to be Yowie hunters but in many recollections had fear of "the large hairy man from the bush that stole woman and children". European settlement in Australia contains reports of the creatures going back to the first settlers. There is even a place named Yowie Bay in NSW about 24km from the capital Sydney and named after an Aboriginal word meaning 'place of echoes'. The "place of echoes" refers to the howling sounds associated with the Yowie animal.

FOR ALL MEDIA-RELATED ENQUIRIES AND TO ARRANGE TELEPHONE INTERVIEWS PLEASE EMAIL US, Jordan, John or Susan: This email address is being protected from spambots. You need JavaScript enabled to view it.

You would be surprised at the variety of people that have contacted us to report their Yowie story and encounters. We have received reports from people from all walks of life including farmers, truck drivers, policemen, soldiers, school teachers, doctors, dentists, soldiers, pilots, and surveyors to name a few. Not all our sighting reports are published on the website for various reasons. We will only post sighting reports on our blog and map page after we have discussed an encounter with the witness and they agree to it. The Yowie News blog has brief reports on the latest Sightings and information in the news about cryptids in general from around Australia and the world.

If You See Something, Say Something

First and foremost we absolutely respect the privacy of people who contact us to report a Yowie sighting or encounter and we wholeheartedly praise the brave souls that have come forward and continue to come forward and report their sightings. It's a very big decision for some people, particularly those that have been personally affected by what they have encountered. We are very interested in witness reports and if you would like to share your encounter please fill in the report form. Your report can be any type of encounter from sounds to the location of tracks or actual sightings. If you have any photos or video we would like to see these also and we WILL NOT publish material that we have not been given the authorization to use. Where possible we will endeavor to forensically investigate locations reported to us. Our blog is continually updated with personal accounts of interactions with Yowies. First and foremost is your privacy and we greatly appreciate and respect your interest in contacting us and sharing your encounters. You can remain anonymous but we do require some contact details to discuss your witness report. We only publish reports to our blog that we have previously discussed with witnesses. You can certainly give us a call, just email John or Jordan - This email address is being protected from spambots. You need JavaScript enabled to view it., and we'll email our phone number for you to call us.

It is unclear where the name Yowie originated from. Some believe it originated from an aboriginal term for a creature that lives in the Australian bush which was called Yahoo. Unfortunately, both names would be called unsophisticated in sound and are not helpful to the recognition of these creatures particularly when compared to its North American counterpart Sasquatch which is believed to be an Anglicization of an indigenous Pacific northwest group called the Salish which use the term Sasq'ets to name these creatures.

The first documented European report of a Yowie or “Wild Man” as it was called at the time was in 1789. The creature had reportedly been captured and taken to England. 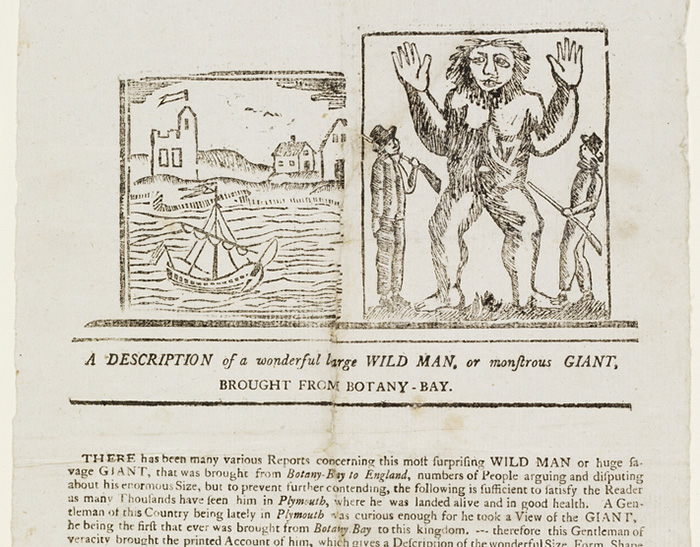 First documented report of a Yowie from 1789

Reports of Yowie encounters have been constantly reported in newspapers since the 1800s to the present day.

The Yowie has been reported in all Australian mainland states and Tasmania.

Yowie creatures are also found around the world and are known as Bigfoot, Sasquatch, Yeti, and Yeren to name a few.

There appear to be two types of Yowie.  One type is a large hominid form that can be in excess of 10 feet tall with either black hair covering or rusty red hair covering similar to the colour of an Orangutan and the other type is a smaller hominid form from 4-6 feet tall but extremely hairy. There is some conjecture as to whether the sightings of the smaller creatures are juvenile rather than a separate type of hominid. 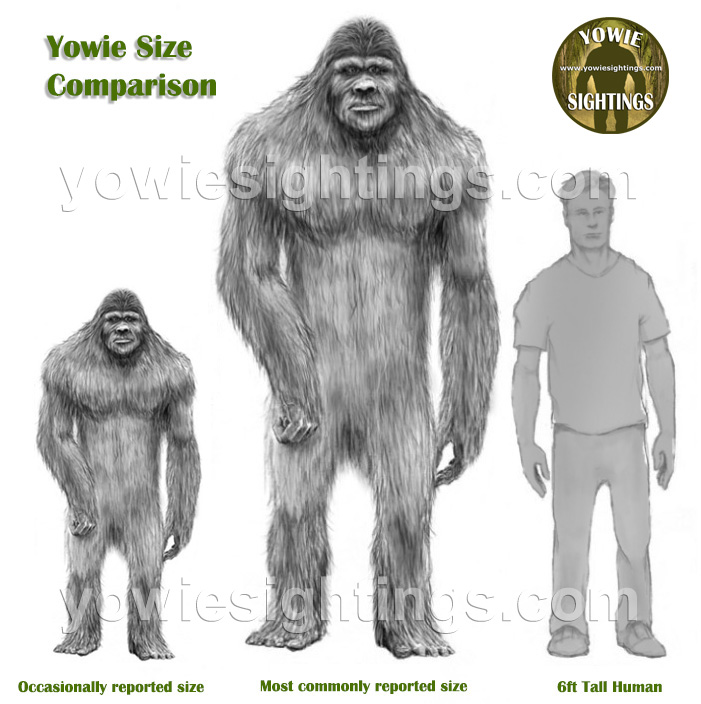 Searching for Yowie - A word of warning

Our team team conducts regular research and surveillance operations to investigate locations where the creatures have been seen and incorporates a range of dedicated recording and monitoring equipment in the process such as Thermal Cameras, Drones and Audio Recorders.

We understand that there are some people that want to see the Yowie for themselves, conduct Australian Yowie research, and travel into the bush looking for the legendary creature. From the many reports, we have on file, and our own experiences we strongly advise that any search for an encounter be conducted with the utmost safety in mind and best done with 2 or more people. The larger Yowie creatures found in Australia have shown very aggressive behaviour at times and in some circumstances, charge people, throw stones and logs and produce hideous growls and screams when confronted. If you do intend to go looking for these creatures we recommend not doing it alone. There is some evidence in reports that strength in numbers does dampen the aggressive response but not always. The aggressive traits also lead to another disturbing trait, not only found with the Yowie but also reported in the Sasquatch and Bigfoot behaviour in north America. It has been reported throughout the history of the Yowies and Bigfoot of the abduction of younger children and women. Native folklore describes these traits in both North America and Australia. Women and children have not been the only victims in these abductions and there have been lone hunters that have been attacked and some vanished without a trace and attributed to Bigfoot encounters. Our recommendations are that if you do have an encounter you should move out of the area in a steady manner and don't run. Running away appears to trigger a chase response in the creatures according to reports we have. The creatures appear to have heightened animal intelligence and are aware of behaviour but they can be bluffed in some circumstances and have run off. In North America hikers and campers can carry weapons as a form of protection but even these have not deterred some creatures during some encounters. We've spoken to people from all walks of life that have had Yowie sightings and the main takeaway from them all is to treat these creatures as you would a crocodile etc. Be extremely careful when encountering a Yowie. Read more about finding Yowies HERE.

People that come forward to tell about their encounters with these creatures are often dismissed and in the worst cases treated as fools and stigmatized. The people we speak with about their sightings and encounters are anything but fools. People from all walks of life and professions have been in contact with us to describe what they have experienced and we have spent time discussing their stories. We will listen to anyone that has had an encounter or would like to know more about these creatures and we treat people with the dignity they deserve.